Known as Colorado’s marquee ride, the annual Ride the Rockies (RTR) brings 2,000 cyclists together from all over the U.S. Team Samaritan House is the single largest cycling team participating in RTR. The team hopes to raise awareness for the homelessness issue in the Denver metro area and raise money to support Samaritan House in providing food, clothing, and shelter to the homeless of Denver. To get the scoop, we chatted with Team Samaritan House captain Tom Schwein.

Team Samaritan House Captain: Q and A With Tom Schwein 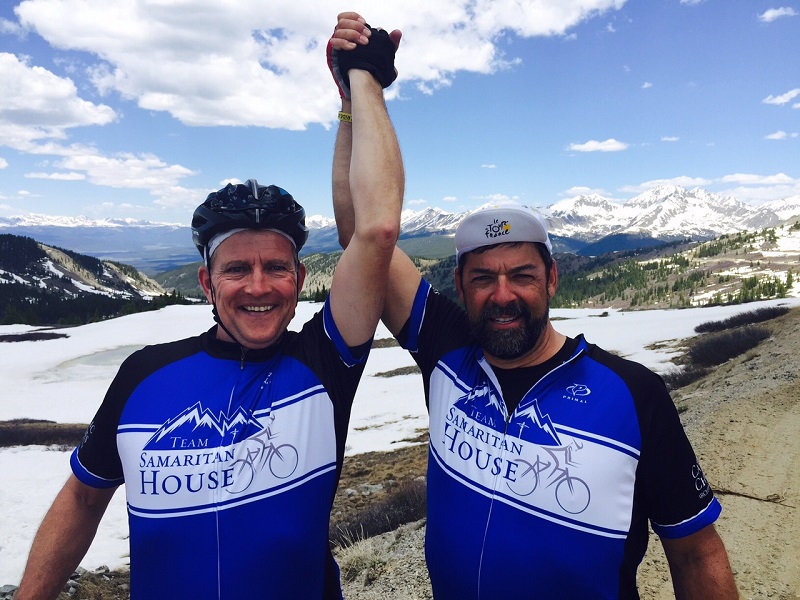 What inspired you to create Team Samaritan House?

Around Christmas 2010, I wanted to lose some weight as my oldest daughter was getting married the following July, and I wanted to look good for the wedding. In speaking with a close friend, Tom Dea (now my co-captain), we decided to participate in Ride the Rockies. I knew a guy who could get us ‘guaranteed’ entries. I didn’t even have a bike. Once we registered for RTR, a friend found me a bike and we started training in March, 2011. On one of our first training rides up Deer Creek High Grade, I began to ask myself the question, “If we are going to sweat it out in training, why don’t we raise some money for a worthy cause?” I was on the Board of Directors at Catholic Charities of Denver, a nonprofit that provides a large range of social services to help people in need. They operate homeless shelters including Samaritan House. I chose Samaritan House.

At the time, I was the CEO of Deep Rock Water Co., which delivered bottled water to offices and residences. I asked our marketing folks to purchase a jersey, jacket and cycling shorts for six riders the first year. Six of us raised $12,000 for the Samaritan House – we thought we had hit a home run.

Having enjoyed the journey to get in shape for RTR, I decided to continue for at least five years in cycling for a cause.

How has the team evolved over the years and what led to that change?

In 2015, I was working in northern California and commuting back and forth to Colorado every other weekend. I trained in California on alternative weekends, often riding 100 to 150 miles per weekend. I was in really good shape.

At the finish line in Westcliffe, Colorado, on June 20, 2015, I took my right hand off the handlebars to high-five one of my teammates, hit a small divot in the pavement, and catapulted over the handlebars at 30 miles per hour, landing on the left side of my face. I had eight fractures in my face.

I was transported by ambulance to Pueblo – St. Mary’s hospital, where they did a CAT scan. My sinuses were crushed, and I was bleeding out of both ears. They released me after an hour, but said I needed to see a specialist regarding surgery. Two days later, I met with a surgeon who looked at the CAT scan and said, “Unbelievable. You missed a brain bleed by two millimeters.” The statistics on crashing face first are grim: 50% of riders die at the scene, another 48% end up with brain damage. I was one of the 2% lucky ones.

Over the next few days while healing in Denver, I couldn’t stand to look at my bike. I swore I would never ride again. A few weeks later after returning to California for work, I was in church on a Saturday night listening to the sermon, and God spoke to me saying, “I am not yet done with you here on earth. Continue your ministry.” I realized I had been spared from certain brain damage or death and wasn’t sure why. I said to myself, “God, I am all in.” The next day, I got on my bike in California and rode 100 miles.

Why is it important for people to participate in Ride the Rockies and other similar events?

I’m not sure it is important for people to participate in organized cycling events, but they are sure fun. And if you are in shape from training on a bike, the rides can be truly enjoyable. Cycling is a great sport, not as hard on the knees as running.

Ride the Rockies is a marquee event lasting six to seven days, covering 450 to 500 miles, and generally between 25,000 and 30,000 vertical feet. It is not for the faint of heart, nor for a novice cyclist who doesn’t train properly. Most other organized cycling events in Colorado are one to three days. Any advice for new riders or those considering riding in a tour?

If you don’t train, you will not finish. For RTR, you must train both on the hills and flats. RTR says that by the time you get to late May every year you should be riding 150 miles a week with half being hills (Lookout Mountain, Deer Creek, Squaw Pass, etc.) and the other half on the flats.

Do you have any future goals/plans for the team?

I have become so passionate about Team Samaritan House as a result of my crash and subsequently raising $250,000 in the last two years that we have now expanded the team from just participating in RTR to participation in all the rides during the 2018 summer cycling season. As a result, the team has expanded from 39 riders last year to over 80 this year. With this said, my personal goal is to raise $250,000 in 2018, and another $250,000 in 2019, bringing our nine-year total to over $1 million in fundraising for Samaritan House.

I think my long-term vision for Team Samaritan House is continue to grow to become the single largest cycling team in Colorado. I believe we can achieve this with a few hundred committed riders. Next goal is consider franchising this model and duplicating it across the nation, so other cities can have a cycling team to raise money for their own Samaritan Houses. We may be able to achieve this through existing non-profit organizations similar to what Catholic Charities has done here in Denver under the leadership of Larry Smith, the President and CEO.

Saint Teresa of Calcutta said, “We cannot all do great things, but we can do small things with great love.”

We are all called to give back in some ways to those who are not as fortunate as we are – whether it be to clothe the naked, feed the hungry, provide shelter to the homeless, etc. God has specifically called on me, and I must answer his call.