Known as one of the most haunted cities in America, Savannah welcomes visitors – both living and beyond the grave – to sample its food scene. The city has a rich history rooted in Southern and seafaring culture, both of which have carried on throughout centuries. This history has even made its way into the most popular restaurants in Savannah. Brave enough to dine here? Learn about these Savannah haunted restaurants. 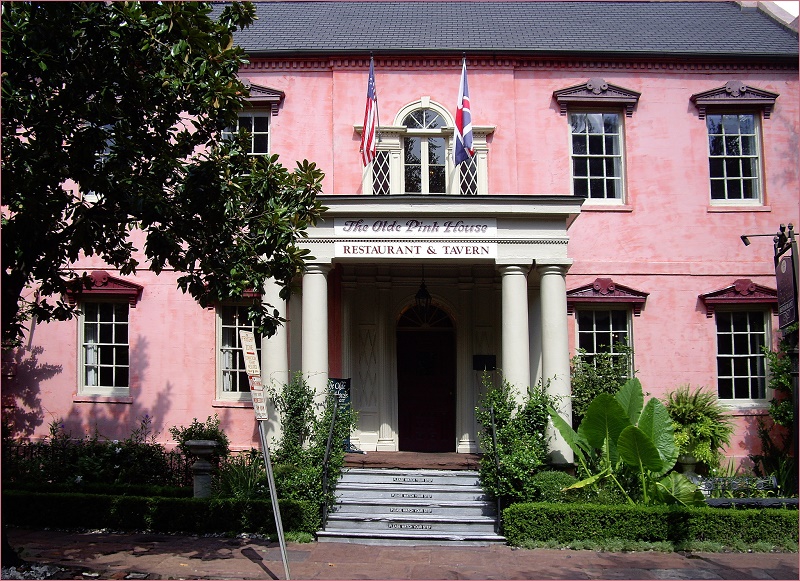 Olde Pink House Restaurant sits in the city’s only 18th-century mansion and is adjacent to Planters Inn. At Olde Pink, diners find Low Country cuisine and live entertainment every night. The menu offers several options, but the most popular are Pink House platters. Named for the home’s original owner, Habersham platter has shrimp and grits, a crab cake, and seared scallops. Or order an entree, such as salmon, flounder, half-duck or ribeye.

Haunted background: Built by James Habersham Jr., he dreamed of building a home to host friends and family. Ten years after completion, he passed away and his family continued to reside in the home. Legend says Habersham Jr., a Revolutionary War veteran, Habersham’s descendants and former house servants all haunt the building.

Ranked as a favorite haunted inn and restaurant in Savannah, 17hundred90 Inn and Restaurant offers Southern tradition and a friendly atmosphere. For over 100 years, 17hundred90 has delighted diners and ghost hunters alike. Paired with its comfortable ambiance is a full menu featuring steaks, seafood and jambalaya. To start, try crab cakes or bacon-wrapped scallops. Then order Neptune, a sample of seafood favorites, or filet mignon with bourbon demi-glace.

Haunted background: The name 17hundred90 Inn and Restaurant comes from the year in which the building was erected. Room 204 is said to house Anna, the ghost of a previous tenant who ended her life after suffering great loss. Another ghost some say haunt the restaurant is a Voodoo practitioner who prefers hanging out in the kitchen.

As Savannah’s only haunted brewery, Moon River Brewing Company ranks as a top spot for pub crawls, and has been featured on Travel Channel. Housed in a historic hotel, the restaurant/brewery features an outdoor beer garden and pub fare. The menu offers small, shareable, green and large plates, as well as build-your-own-burger options. For a starter, try deviled eggs with smoked trout or pesto hummus. Entrees range from pork ribs, chicken and sausage creole, and Low Country crab melt.

Haunted background: Moon River Brewing Company is located in a former hotel that dates from 1821. The building’s upper floors once served as a makeshift hospital during yellow fever outbreaks. During the time, several patients did not recover, and many believe their spirits still haunt the building today. Six Pence Pub has three locations in the southeast, but this location earns a reputation as one of the top Savannah haunted restaurants. Here, guests enjoy a British pub atmosphere in a casual environment. The menu has fine ales and foods, including sandwiches, soups and house favorites. Dinner specialties include Shepard’s pie, bangers and mash, beef Guinness, and roast and seafood.

Haunted background: Although no known stories directly link to Six Pence Pub, employees claim to see things move on their own and experience electrical issues such as exploding light bulbs.

Haunted background: Considered one of the oldest buildings in Georgia, Pirate’s House once served as a gathering spot for seamen, criminals and others looking to drink. Stories suggest a tunnel leads from the restaurant to River Street. As far as ghosts, some people claim to see shadow people, seamen apparitions and hear phantom footsteps echoing through the restaurant.

Haunted background: Tondee’s Tavern’s building dates to 1853 and previously served as a bank and location for the Union Army during the Civil War. No known historical figures are directly tied to the tavern, however ghost hunters have had success contacting spirits.

Want to sample most of these Savannah haunted restaurants? Consider a food and pub tour. These tours pair local flavor and ghost stories perfect for a night out with friends or a special someone.

Provided by Ghost City Tours — one of the leading tour companies in Savannah — Ghost City Pub Crawl promises fun, drinks and four haunted restaurant stops. The two-hour tour starts at Tondee’s Tavern and visits historic bars and pubs located in downtown Savannah. Guests must be 21 or older, and make reservations a few weeks in advance.

Read more about Savannah and find things to do. Then book a vacation home in Savannah.