Each summer, Colorado welcomes 2,000 cyclists to explore the mountains for a good cause. Ride the Rockies (RTR) serves as the state’s marquee ride, covering 400-plus miles, over 25,000 elevation gain and six days of adventure. During the event, teams ride their way through different Colorado communities and raise funds for local nonprofit agencies. Read more about Ride the Rockies and learn how locals make a difference.

Ride the Rockies takes place every year in June. For 33 years, the route has taken cyclists through most of Colorado’s most popular communities. Past destinations include Breckenridge, Edwards, Steamboat Springs, Granby and Winter Park.

The event requires months of training and physical endurance. Ride the Rockies suggests that by late May every year, participants should ride at least 150 miles per week in preparation for the event.

RTR is hosted by The Denver Post Community Foundation, a nonprofit that aims to improve and enrich the lives of Colorado residents. The organization provides grants and funds to programs that support arts and culture, children and youth, education, and basic human services.

In 2018, iTrip Vacations® will serve as the main sponsor for Team Samaritan House, a team dedicated to raising funds to serve the homeless in northern Colorado. In support of Catholic Charities of Denver’s homeless shelters, Team Samaritan House ranks as the single largest cycling team participating in Ride the Rockies.

Since creation in 2011, the team has raised over $500,000 to provide clothing, shelter, food, and a fresh start for individuals and families facing homelessness. In addition, 100% of proceeds earned by the team will benefit four homeless shelters in the Denver area: Samaritan House, Samaritan House Women’s Shelter, Guadalupe Community Center in Greeley and The Mission in Fort Collins.

“There is no doubt with the expanded schedule and number of team members, this is going to be a record year for fundraising for such a necessary social service,” Bissmeyer says. “The dedication and vision that captains Tom Schwein and Tom Dea possess is quite amazing. iTrip Vacations® is excited to sponsor such a great team and organization to help the under-served in Colorado.”

One of the newest projects, Samaritan House Women’s Shelter serves up to 100 single women in an overnight shelter program and up to 50 single women in a transitional shelter program that includes recovery resources such as case management services. The women’s shelter opened in September 2017, and houses shelter space, a chapel, showers, lockers, and laundry room. Between the women’s shelter and Samaritan House in Denver, Catholic Charities serves as many as 273 homeless women each night.

“We are blessed to have a dedicated group of riders who are passionate about helping those experiencing homelessness in our community,” says Larry Smith, Catholic Charities of Denver president and CEO. “The fundraising efforts of Team Samaritan House help Catholic Charities continue our mission of providing love, mercy and the compassion of Jesus Christ to those in the greatest need.” 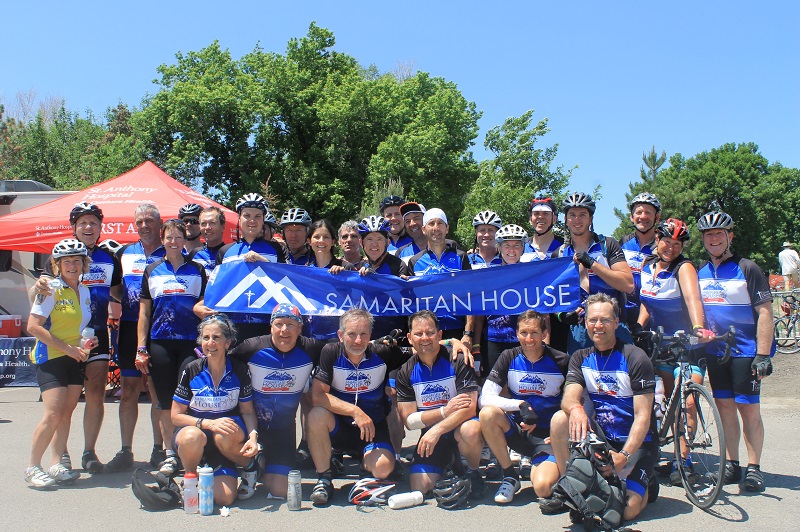 For Team Samaritan House, it’s about more than serving those facing homelessness. It’s a commitment to a higher purpose – one rooted in personal faith and experience.

In 2015, team captain Tom Schwein crashed face-first at the finish line in Westcliffe, Colorado, and broke eight bones in his face, missing a brain bleed by 2 millimeters. The crash nearly forced him to quit riding, however he decided during a church service that he wanted to answer his call.

“A few weeks after I healed and returned to California for work, I was in church listening to the sermon, and God spoke to me,” Schwein says. “He said, ‘I am not yet done with you here on earth. Continue your ministry.’ I realized I had been spared from brain damage or death and wasn’t sure why. I said to myself, ‘God, I am all in.’ The next day, I got on my bike and rode 100 miles in California.”

This passion has led to a commitment to answer God’s message and encourage others to dedicate themselves to the cause. Team Samaritan House has grown from six riders in 2011 to more than 80 this year, all working to raise a minimum of $1,500 each. Schwein believes he can grow Team Samaritan House into the single largest cycling team in Colorado with a few hundred committed riders and possibly franchise the model to other cities, so teams can raise money for other Catholic Charities.