Music City, USA has long been Nashville’s nickname, as it’s home of country music and serves as a major recording center. The Lovin’ Spoonful’s John Sebastian once wrote in song, “There’s thirteen-hundred and fifty-two guitar pickers in Nashville.” Today, it’s probably more like 10 times that number. Plus, there’s no shortage of clubs, concert halls and music parlors. Not sure where to go? Here’s a short list, but Nashville live music venues are scattered throughout the city. One of the preeminent Nashville live music venues, Bluebird Cafe has gained worldwide recognition as a songwriter’s performance space. Songwriters perform their own material, much of it recorded by chart-topping artists in all genres of music. The 90-seat venue is unassuming in appearance but large in reputation.

Garth Brooks got his start at the Bluebird. And the list is lengthy of mega-names who made Bluebird appearances. The club’s “Shhh policy” assures audience chatter will be at a minimum. Additionally, great songs — usually performed in the round — will be heard.

The 20,000-capacity multi-purpose Bridgestone Arena is home of NHL’s Nashville Predators but hosts major touring acts. The seating is comfortable and acoustics are surprisingly good for a large venue.

Country artist Eric Church holds the attendance record at the arena, with 19,020 fans filling the building on the final night. In addition, one of the country music industry’s biggest awards shows — the CMAs — is held annually at Bridgestone Arena. Other past performances include P!nk, Kelly Clarkson, John Mayer, Chance the Rapper, TOOL and Elton John. More than 30 years ago, this small listening room opened with one mission. Become a place for writers and performers to gather in an intimate environment, with the common goal of hearing and creating great music. At Douglas Corner, visitors hear future hit songs long before they are heard by artists who will eventually record them.

While catering to on-the-way-up artists and songwriters, the club has been a hot spot for such stars as Alan Jackson, Trisha Yearwood, The Kentucky Headhunters, Garth Brooks and Blake Shelton.

It’s been a roller-coaster ride for almost a half century for this iconic alt-scene venue.

Though the Opry has been conducted at the Opry House since 1974, its roots began in a hallowed venue, Ryman Auditorium. Once a church, this landmark still hosts live concerts. Attendees sit on wooden pews and watch big names in blues, country, jazz, rock and pop. A few include: Amy Grant and Vince Gill, Kansas, Lindsey Stirling, Gary Clark Jr., and Tori Amos.

Named in honor of the late music director and conductor of Nashville Symphony, the 21st century neo-classical structure opened in September 2006. It is home to an 83-member symphony ensemble, which performs 150 concerts a year and gains considerable mention from commissioning and recording projects with Nashville-based musician-artists.

The Nashville Symphony has claimed 13 Grammys, with more on the way. In addition to classical, Schermerhorm Symphony Center peppers its schedule with artists such as Aretha Franklin, Dennis DeYoung (Styx) and Jeffrey Osborne (L.T.D.) for special programs. 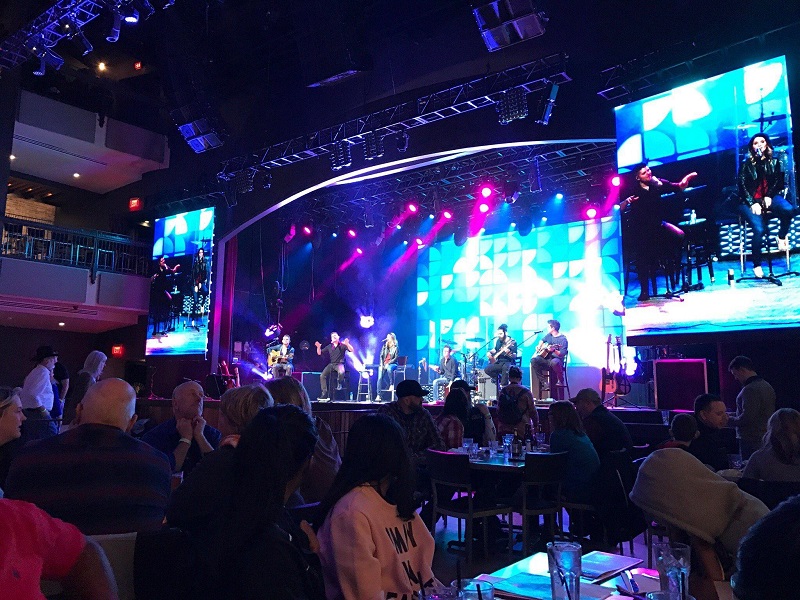 While an array of popular roots, Americana and country artists — such as Vince Gill, Alison Krauss and Alan Jackson — have played Station Inn, it is best known as the home of bluegrass music in Nashville. This spot serves as a hallowed shrine where legends Bill Monroe and Ralph Stanley once stirred audiences.

It’s small and intimate. However, Station Inn can lay claim to its world-famous moniker. The club, presenting both new and established artists, is the place to go to hear the finest bluegrass offers.

For its grand opening in 1994, a herd of cattle stampeded through Nashville to the front doors of Wildhorse Saloon. In a town of big stars and big moves, none beat that for public relations. Since then, more than 1.5 million music lovers annually come to catch the hottest in live country entertainment. During shows, attendees learn new dance steps, and dine on Wildhorse’s signature fried pickles and hot chicken.

It all takes place inside a three-story, family-friendly music and dance parlor in the heart of downtown Nashville. The likes of Darius Rucker, Lady Antebellum and Rascal Flatts have played the Wildhorse, which also offers the stage to up-and-comers.

After reading about the top Nashville live music venues, find more things to do. Read why Nashville is a top vacation destination.

Then read why Nashville ranked among these garden-loving cities.