Many sports fans consider the Dallas Cowboys “America’s Team,” but elite-level professional sports are everywhere in Big D. Championship teams also have been fielded in hockey, basketball and soccer, as well as two American League pennants for baseball’s Texas Rangers. In Dallas, take in exciting game action from eight major professional sports, including tennis and golf tours. Here’s the scoop on the Dallas pro sports scene. 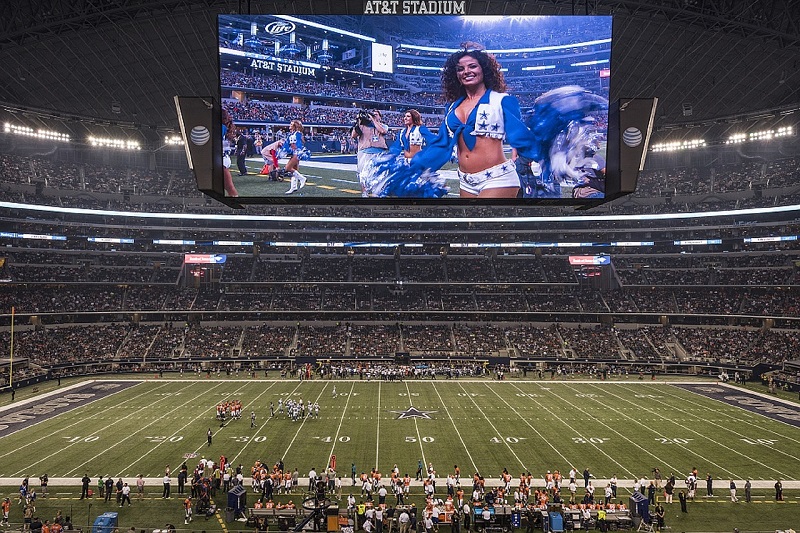 Since 1960, the Dallas Cowboys have built one of the winningest traditions in the NFL, taking five Super Bowls and sending 15-plus players and/or coaches and owners into the Pro Football Hall of Fame.

The names of Cowboys legends — from Bob Lilly, Roger Staubach and Bob Hayes to Troy Aikman, Emmitt Smith and Michael Irvin — ring throughout AT&T Stadium. This Dallas iconic venue is technically considered the largest air-conditioned room in the world. With 3 million square-feet, the entire Statue of Liberty plus its base could fit inside AT&T Stadium with its retractable roof closed.

NBA’s entry into the Dallas pro sports fold is the Dallas Mavericks, NBA champions led by Dirk Nowitzki, a 13-time league all-star. The Mavs play at American Airlines Center, a multipurpose sports arena in Victory Park with 19,200 seating capacity. Since their inaugural 1980-81 season, the Mavericks have won three division titles, two conference championships and their league title in 2011. Other legendary players include Hall of Fame guards Jason Kidd and Steve Nash.

Women take flight in pro hoops, too, under the WNBA’s Dallas Wings. Originally founded in 1998 as Detroit Shock, where the franchise won three league titles, the team relocated to Tulsa in 2010 before coming to Arlington and College Park Center arena in 2016.

In Arlington lies Globe Life Park, home of the American League Champion Texas Rangers. The franchise, originally formed as the ‘new’ Washington Senators in 1961, relocated to Arlington in 1972 to begin operation as the Texas Rangers.

Over the years, the team has fielded such diamond standouts as Jeff Burroughs, Nelson Cruz, Juan Gonzalez, Josh Hamilton, Ivan Rodriguez, and baseball’s all-time best pitcher, Nolan Ryan. As of 2018, the Rangers are building a retractable-roof ballpark, Globe Life Field, with plans to open in 2020.

Also sharing American Airlines Center are the NHL’s Dallas Stars, a fixture since 1993, when they relocated from Minnesota after 26 seasons as the North Stars.

The team has won eight division titles in Dallas, two Presidents Trophies as the top regular season club in the NHL, and has claimed the Western Conference championship twice. The Stars capped off the 1998-99 season with the sport’s crown jewel, the Stanley Cup. Many superstars have graced the ice for the Stars, including legendary center Mike Modano and wingers Jere Lehtinen and Brenden Morrow.

One of the six founding members of Major League Lacrosse, the Dallas Rattlers became the first professional lacrosse team to call Texas home in November 2017. At this time, the league announced its franchise from Rochester, New York, would relocate to Frisco, Texas, and the 12,000-seat Ford Center at The Star indoor stadium.

Often called the fastest game on two feet, lacrosse has exploded in popularity and is now the fastest growing youth sport in America. A charter member of Major League Soccer since 1996, FC Dallas — originally the Dallas Burn from 1996-2004 — plays home games at the 16,215-capacity soccer-specific Toyota Stadium in Frisco. The club is a two-time U.S. Open Cup champion, the oldest ongoing national soccer competition in the U.S.

There’s indoor soccer, too. The Dallas Sidekicks in Allen, Texas, are in their second incarnation, having played from 1984 through 2004 before reforming in 2012 as an arena soccer league entrant. The team plays home games in Allen Event Center in late fall and winter months.

Each May, the PGA Tour makes a doubleheader golf stop in the Dallas area. The tour kicks off with AT&T Byron Nelson held at Trinity Forest Golf Course in Dallas. Then attend Charles Schwab Challenge conducted in nearby Fort Worth at Colonial Country Club, once home of golfing icon Ben Hogan.

Women golf pros aren’t left out, either. The Volunteers of America LPGA Texas Classic tees off each spring at North Dallas’ Old American Golf Club in The Colony.

For over 20 years, stars of the ATP Challenger Tour have flocked to Dallas’ T Bar M Racquet Club. The United States Tennis Association — the longstanding national governing body of tennis in America — organizes this pro developmental circuit, with Dallas an annual stop for the men’s Challenger series each winter. The women’s USTA pro circuit stop comes to Fort Worth in late July.

While watching Dallas pro sports and superstars, don’t forget to explore the city. Read about the top Dallas neighborhoods and find things to do. Then browse Dallas vacation homes perfect for groups.